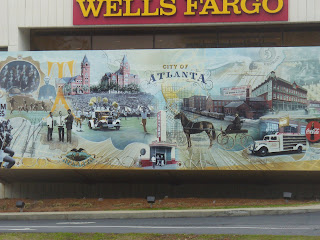 Background: Outside the borders of campus there's a Wells Fargo that bears a mural of different things you may see when you're in Atlanta. For starters, there's the Ramblin' Wreck, which is obviously the best part of this mural. The first GT band picture can be seen in the upper right, as well as a few other Tech related things. There's the Coca Cola logo, since it's a huge part of the city. There's a train station, in remembrance of the time when Atlanta was named Terminus due to the fact that it was where several railroads ended, giving birth to the city. And who can forget the Varsity? The designer didn't, that's for sure.

Taking the picture was a little miserable. It was windy today. Too windy. Too cold. I thought we were supposed to be in Spring soon. What happened to those shorts/short sleeved shirt days we were supposed to have? And I finished taking pictures just as the Blue bus arrived. At least I didn't have to wait out in the cold for much longer for another bus to run by.

Edit: I forgot something! Today is Miss Ella Greer's birthday. So Happy Birthday to her!
submitted for your eyeballs by Wes at 6:30 PM