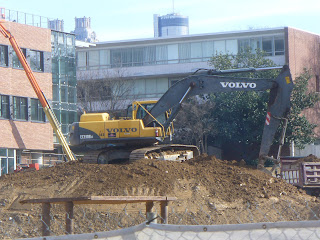 Getting out of lab two hours early in a three hour lab? I love it.

Background: There's lots and lots of construction going on around campus, ever since I got here. I'm also studying Civil Engineering, so it's kind of interesting to me to watch the whole process go down. As for the picture, all five I took of this look just about the same, but for some reason having the dump truck right there really appealed to me. I had some shots where it was driving off further, but I really wanted to see as much of it as I could.

Today has been full of little things that have been going well. The EAS test today sucked, and I wrote down some song lyrics for one of the questions that I had no clue what it was about. There was a bird that looked like it was going to hit me as it flew by. I heard two guys talking about math on my way to the Student Center (because you wouldn't hear that ANYWHERE else in Atlanta, which is hilariously awesome in my opinion). The little things today have made today worth living. And the day isn't even over yet, and tomorrow is Friday! What more could you want? Then again, I never really got the hang of Thursdays...

today's video is a battle most epic...
submitted for your eyeballs by Wes at 4:11 PM