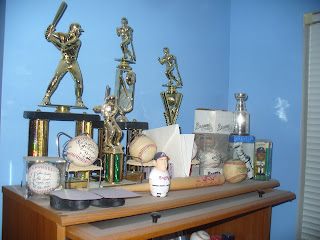 Picture: Baseball (and some hockey)!

Background: I used to play Little League back before high school. I wasn't very good but I really liked to play. I got a couple trophies and things while I was there as you can see, as well as one or two gameballs. One of those (the one on the chair like thing behind the nesting doll of Chipper Jones) is the only home run I've ever hit. I was really, really happy when that happened. It really didn't even feel like a homerun...then it went over the fence. Pretty good day, I'd say.

It's storming outside. Lots of lightning, lots of weather warnings. Just came back from more hanging out. I forgot to mention this yesterday (because I was trying to post at 1:17am but missed) that I almost ran over two kids. It was dark, they were wearing dark clothes, and they weren't white, so they were honestly hard to see. I was pulling out of a turn lane at a light more worried about potential oncoming traffic; I was completely not suspecting some people could be so idiotic enough to cross that far from the crosswalk in dark clothes and not have a close call. It pissed me off - I could've gotten at least 30-40 points! Ah well.

today's video is a hilarious mash-up...

submitted for your eyeballs by Wes at 11:42 PM