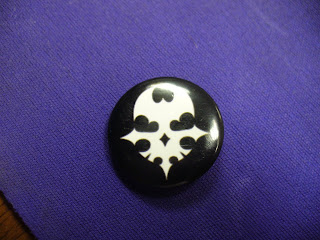 I should be working. I really should. Oh well.

Picture: The World Ends With You

Background: Okay first, for the picture, I could not get the lighting to stop bugging me until I moved the pin onto my mousepad. Then it was okay. Second, the camera was absolutely refusing to focus on the pin itself, and consistently stayed focused on the background. That was really frustrating.

Now, for what it actually is: a pin from a game. But not just any game - probably the best DS game made up to date, and probably ever. The storyline was fantastic, the gameplay was very fun, and it has replay value for me, at least. Right now my copy has been lent out to a friend (dunno how far he is into it though). But if you have a DS and haven't played this game, you need to, whether you think the whole Japanese style is awesome or dumb, because you'll enjoy it.

I've been wearing this pin around campus, and so far only two people have actually told me that they knew what it was from. Those people were in HvZ, that I stopped and talked to. So I'm not sure if many other people around campus have noticed and knew what it was from or what. Regardless of the reference, it's pretty awesome looking in my opinion. Hohoho, I'm clever, aren't I?

today's video is some fun science...
submitted for your eyeballs by Wes at 10:24 PM