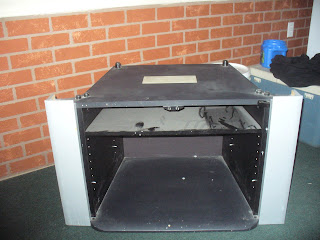 Background: So, three main things happened today. First, I woke up earlier than I have woken up in probably a year to go work with brother and dad. Since I'm not used to physical labor, it took its toll. Second, the shower afterward? Heavenly. It's been awhile since one has been that relaxing. Since I haven't had a sincerely private not-near-hallmates shower in awhile, I took the liberty to actually sing a few songs. The third involves this nice little TV stand you see in the picture. After that shower, I had to wait a bit for my vehicle to arrive home. Once it did, I carried in the groceries that came with it (if I tried to carry the woman driving, I might hurt one or both of us), and prepared the car to hold a nice TV and stand. Drove to the brother's house, picked up the heavy, painful-to-lift TV, and loaded it into the car. Drove down to the dorm. Called roommate, who had to call another hallmate because roommate and I couldn't pick it up together. Bring into room. Carry the less massive stand into room. Try to arrange stuff around, and decide to postpone until Saturday. Which is actually going to change. Took the stand home because it was taking up way too much room in the dorm (and roommate and I couldn't lift it onto the drawers+stand without killing someone). Grabbing some food because it had been awhile since I ate. Came home, took stand out, took a picture, and sat down and begin writing this post (among other internet-reading-gaming things).

So yes, it has been a long day for me. I feel as if I might fall asleep trying to find a video that none of you will probably watch anyway :D

today's video is actually pretty hilarious, and worth the watch...
submitted for your eyeballs by Wes at 10:05 PM