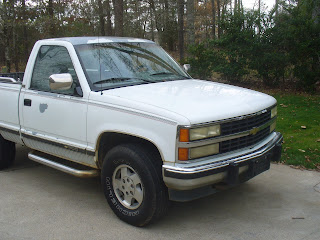 Tomorrow morning will test to see if I can drag myself out of bed early. This is going to be rough.

Background: Way back, when I wasn't even born yet, my parents got this truck. Two months before I came into this world, they got this Chevy truck. They've had it longer than they've had me. But what happened today was that it has finally been sold. An older gentleman had come by and said he would probably be restoring it a bit and maybe reselling it. It's seen better days for sure, but my parents have had this truck longer than I've even been here! It's sort of sad to see if finally go, but it's nice knowing that it'll get fixed up a bit. Going to work now and then in it as a kid? Fun times! But they've got to get that red van fixed up, and if Dad drives that truck around anymore, it might just fall apart in the middle of the freeway.

I've just got this sneaking suspicion that, now that they've sold the white truck, they'll be selling me when my birthday comes around.

In other news, I'm getting that facebook page together for the heck of it. So I won't be spamming my personal facebook page with the individual posts, but instead with advertisements of the blog's facebook page. Trading one for the other. /shrug

today's video is about wasting time...
submitted for your eyeballs by Wes at 9:40 PM