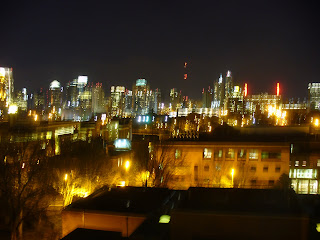 Background: Got to go up with the astronomy club last night. It was pretty cool - seeing the moon up closer than I have before. I loved the skyline and wanted to grab a few pictures of it before leaving for the night. Unfortunately, I don't have a tripod and there was nothing to keep the camera steady on. I thought maybe one or two of them would come out with decent focus, but it was not to be. As I looked through the ones I took, I thought this one looked pretty cool with how it had a vibrated effect to it. Like you were a little out of focus or something. Because it was vibrated, and it was out of focus, oddly enough.

One of my internet friends is supposedly within 10-20 minutes driving distance from where I'm at. It's a shame we're both busy though, because it would've been cool to finally see someone that I've talked ages to and never really got to meat.

Yes, meat. Yes, I intentionally make that typo. You should too, it yields some hilarious results.

submitted for your eyeballs by Wes at 6:17 PM