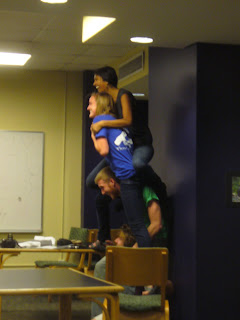 !@#$!@#$!@#$ I was playing some awesome games with some pretty awesome people (including one of those follower peoples), and thought I'd get back in time to update before midnight. Looks like I was wrong.

Picture: What in the

Background: While I was playing games there (Mafia, Signs, Kemps), there were people doing some sort of scavenger hunt around us. Apparently they had to build some sort of human tower and take a picture. Another thing they had to do was take a video of them asking a complete stranger for money in Spanish. It was kind of awkward, kind of funny, and kind of weird all at the same time. I was a little jealous, but I was rocking at the games I was playing that night. Mafia went great, my swing vote won the game for one of them, and we killed the mafia in two rounds the second game. We switched to Signs, a game where everybody had a little sign that they did which passed an invisible ball around. If you had the ball, you had to pass it by showing someone else's sign, and they received it by showing their own sign. Somebody would stand in the middle and try to guess who had the ball and if they were right, they would take their seat and whoever had the ball would be in the middle. It was pretty fun.

Kemps was similar, but with cards. Four cards lay in the middle, everybody had their own four cards, and sat across from their partner. If one of them got four of a kind, they would signal to the other person that they had it, and their partner would then say "Kemps". If someone from a different team saw that they had four of a kind, then they would yell "Stop Kemps" to stop them. It was a lot of fun, and my partner and I won both rounds that I played in. Awesome night.

As for now, I'm about to go do some midnight (well, 1AM) laundry. Don't forget to set your clocks forward if you've got a watch or something. If you just use your cell phone, just remember that you're waking up an hour earlier tomorrow. Loads of fun, right?

today's video is a really cool indie pop remix...
submitted for your eyeballs by Wes at 12:46 AM