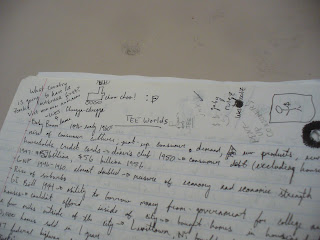 I'm fascinated that people are interested in this. It's as if I have important things to say. Then again, I heavily suspect it's just for the pictures. Probably.

Background: Gaby never stops writing on my notebook, and I never stop writing on hers. I don't even know how we started it, but I blame her because it was her. In this dandy little picture you can find a train ("chugga chugga choo choo"), a reference to that game Teeworlds that I'm hopelessly addicted to, a guy with dollar signs for eyes, the word jerk with a check mark by it (because Gaby it a jerk), a man holding a dollar sign, "PENT-UP CONSUMERS", and another mark where Gaby wrote "Gaby rulez, Wes droolz" except I marked out the D because I roolz more than she does.

There's also a joke I came up with in class: What country is going to be the first with zombies? Vietnomnomnom. Ha! Clever, right?

today's video is a fun flash mob dance...
submitted for your eyeballs by Wes at 5:59 PM