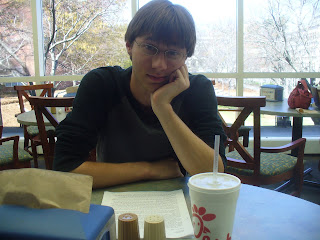 Background: Well, SOMEBODY got a hold of my camera and decided to start taking a copious amount of pictures of me and the green room in the student center. I don't know what her problem is. I really need to shave, too. Or, at least, stop waiting to shave every three days like I have been doing. It gets really annoying when I actually do.

If you actually read this constantly (all 3-4 of you), then you may remember that story I said I was working on. That's what is sitting in front of me. I tried to get some edited done, but with hundreds of camera clicks everywhere, it's hard to concentrate. Oh, and there's also the Chick-Fil-A cup. Mr. Pibb is awesome, and I'm soda addicted. I think I've mentioned that before.

I would've updated earlier, but I was at trivia night at a local pizza place, and we won. Woo, Little Lebowski Urban Achievers! I also had to restart my computer due to the fact that I couldn't copy and paste and was forced to delete a registry file in order to fix it. I have a feeling the Windows update yesterday caused some trouble.

today's video is telling you something you ought to know...
submitted for your eyeballs by Wes at 11:35 PM

Email ThisBlogThis!Share to TwitterShare to FacebookShare to Pinterest
Includes: friends, me, music, soda, You Are A Pirate