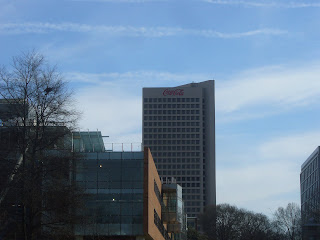 Fffffffff-late update because I was playing Black Ops with a guy on my hall. I had an awesome 17-7 game at the end. And the top of the page's late-update counter goes up. Great.

Background: On day 41 I took more pictures, and this was another one of them that I took, just before I got to the construction area. The building more in the foreground is what the construction is all about. But we see a huge symbol of American capitalism in front of us...Coca Cola...delicious, right? I've got my Pibb Xtra in front of me as I type this. Damn soda companies have me hooked. And the only Pizza Hut that has Coke products in the country is on our campus. Their influence is strong. You could say that their culture spread rate is...wait. I've been playing to much Sins of a Solar Empire. /shakes fist

today's video is full of pennies...and totally worth the watch...
submitted for your eyeballs by Wes at 12:31 AM