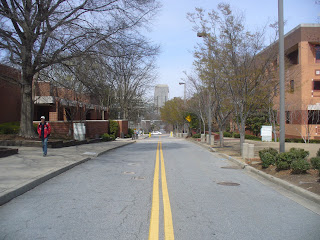 2 o'clock update? And not at 2am, but 2 in the afternoon? What blasphemy!

Picture: In the middle of the road

Background: This is one of those things that you sort of just don't really think about sometimes. As in, it's just a road, right? There's nothing special about it. It's just got cracks and manholes and a street light like millions of other roads in the world. Well, let me assert that things like that make it special. There's something about standing in the middle of the road and just looking down it that makes it seem unique. You can't always look down the middle of the road for obvious reasons (I mean, you never know what kind of trash you'll be standing on or what manhole you'll be falling down. Traffic?...that too). Having nothing special about this makes it kind of cool in my eyes, since people rarely ever think how cool of an engineering feat it is to make such a network that we have. It's done on such a grand scale that it's become commonplace to just drive down these things and complain when they get worn out. I like how Louis CK puts it, "Everything's amazing, and nobody's happy".

So yeah, enjoy the things that you take for granted, is what I'm saying. That's today's lesson. I'm not a certified teacher, so I don't know how valid the lesson is, but it might be worth something.

today's video is an exploded game boy...
submitted for your eyeballs by Wes at 1:59 PM