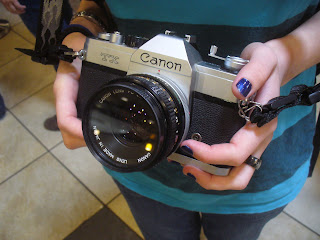 To make up for last night's really late update, I'm putting this one up before 7pm. Aren't I sweet?

Background: A friend of mine, Gaby, in my History 2122 class messaged me last night that she had a camera that she would show me today. It's a Canon (as you can probably tell), manual focus, film (she had some black and white film in there today), and 35 years old. I don't know about the specs other than that, and I probably wouldn't know what half the specs meant if I knew them. I do know that you have to be at least a foot away from something, so my favorite thing of doing macro pictures (really close up pictures) probably wouldn't like this camera. But I did get to hold it and look through it and whatnot. It reminded me of my mom's old film camera that I've had the desire to try out but never gave it a shot.

I almost didn't get to take a picture of this, but as we parted it was nagging me. Like, "Oh, Wes, you should take a picture of it. It's the perfect thing for today's post! Just run back there already. You've got an hour before class starts anyway!" So I did. I'm glad I did too, because I didn't have much other opportunity to snap a photo anywhere else. I could've taken one or two of cleaning the drum room up, but I was busy trying to help.

today's video is louis ck sucking a bag of dicks (very nsfw, obviously)...
submitted for your eyeballs by Wes at 6:25 PM