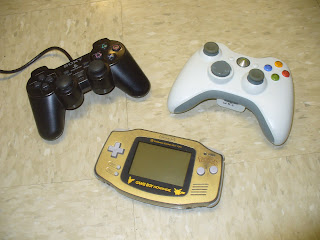 Me just now: "oh crap I need to update before midnight. crap crap crap what to take a picture of...AHA!"

Background: Yes, if I cared enough to have a smart phone, it would be in there too. Yes, that's my name on the bottom of the Xbox controller. I put it there because I didn't want it to get confused with anybody else's on the hall. Yes, I put them on the floor for the pictures, but that's because I didn't have room on my desk. So nyah. I really loved the GBA the most, partly because it has "Pokemon Center NEW YORK" on it and the other Pokemon stuff, but also because I've probably put the most gameplay hours into it. Everywhere I went, it went with me (except school). I kept it in the van so I could play to and from home. I cursed driving at night because I couldn't see the screen and didn't have one of those fancy screen lights.

I keep forgetting to mention this, but I've had a page view from China, Canada, and the UK. Cool deal! Also, someone referenced me on twitter or something, because apparently some traffic came through there about 2 weeks ago or something. I thought that was neat.

Also, I got an IM thing called Trillian. So if I know you and you've got some sort of messenger like MSN or AIM or something that you would want to bug me on, feel free to yell at me. Yeah.

today's video is a cool collaboration...
submitted for your eyeballs by Wes at 10:30 PM