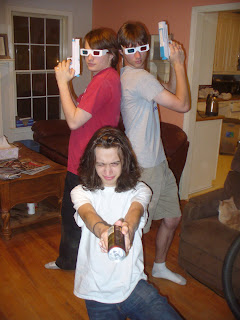 I hit "New Post" at 1:17am. I hope that makes up for the lateness for you two readers out there.

Background: Okay, so the reason I was late was because I was hangin' out all day with awesome friends. I honestly didn't get home until 1am. We were gaming, literally, all day, from when I got there at 2pm all the way until about a quarter to one when we finally finished up. There was one point where someone said, "Yeah, it's nine o'clock" and I thought, "Really?!". It did not feel that late at all, but time flew like no tomorrow. Lots of Super Smash Melee going on, and some Serious Sam as well as The House of the Dead. This is me and two others of those friends with our awesome glasses trying to play a 3D Wii game (similar to House of the Dead, but not really) and then we killed some House zombiez afterward. Lots of fun was had today/tonight.

today's video is the best videogame trailer ever...

Edit: Facebook page is definitely happening. It's just a matter of being home and it not being late at night.
submitted for your eyeballs by Wes at 1:16 AM