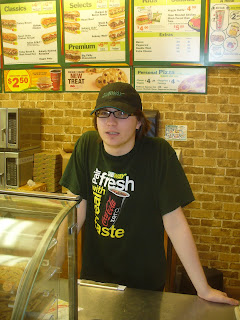 Background: First person I've seen since coming back home, Allan! He works at the Subway pretty dang close to my house. If the roads nearby weren't so dangerous than I could be within biking distance of it. Sounds like he's getting along pretty well for only his fifth day, so I had to go and give him a hard time. The guy he was working with also was giving him a hard time, so all is right with the world!

Today was my mother's birthday, so she got taken out to both lunch and dinner. Lucky her! Except she got older, so it balances out. And Longhorns was pretty good, too, so it was doubly balanced, if that makes sense. Other than that, mostly uneventful day. Which was nice, for a first day off.

today's video is just impossible...
submitted for your eyeballs by Wes at 10:33 PM