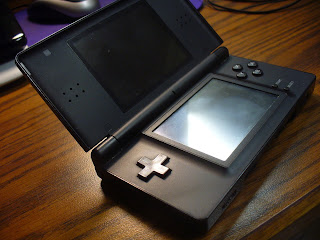 I had no idea for today's picture. Seriously. No idea.

Background: Like I said, I really felt like I had run out of interesting things to take pictures of. I think this'll work, though, since I love my DS. I would've had the original, fat DS if the top screen didn't break. But things happen, and I got myself a replacement. It's too dang useful for waiting around, too. Just pop it on, play for a bit, close it for a few seconds if someone needs your attention for two minutes, etc. My problem, though, is that I think I left my charger at home! So the battery is now in red and I can't do anything about it...unless somebody has a charger out there, and I have the will to ask people. I might just put up a facebook status or something.

The only interesting thing that happened to me today was that I saw seven police officers hanging around the Student Center. I'm not 100% clear why, but it was kind of creepy to see them just pull up one by one and stroll around, looking around. I was told that a camel escaped (from a petting zoo nearby, maybe?), but I don't know the full truth personally.

today's video is a japanese commerical...
submitted for your eyeballs by Wes at 9:06 PM