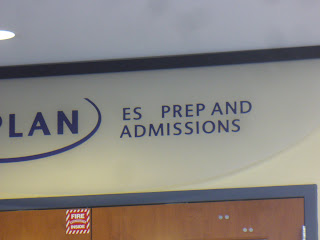 To make up for yesterday's late update, it's an update prior to 1pm! You'd better be thankful, since this almost never happens.

Background: I looked at this and thought, "What on earth is ES PREP?" Another second later, I thought "Oh wait a minute. EST? Did someone steal the T at the end?" and then it hit me. TEST preparation...But at least my first instinct is guessing that a T was stolen from it somewhere. Like I said in one of the earlier posts, it's all over campus. Lots of signs without T's are a usual sight. It can get pretty funny. I know the Architecture Building is missing two very nice silver T's, and that signs for buildings have some easily stolen T's.

today's video is a trollin' soccer goal...
submitted for your eyeballs by Wes at 12:25 PM