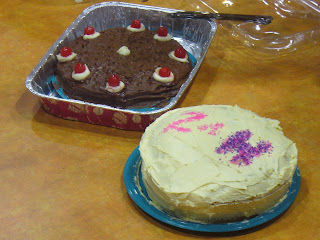 I know I have stuff to do. I know there's something I'm supposed to be doing. I don't have a clue what, though. Hopefully I'll figure it out.

Picture: This was a triumph.

Background: Cake! It's a lie! But seriously folks...that's a cake from Portal, except that the candle was missing. The other one was an HvZ cake, or as the people I was with called it, the radioactive cake, since the ending of the Humans vs Zombiez game had all the zombiez turn into radioactive zombiez at the end. This was taken at the HvZ afterparty on Saturday night. 'twas a fun week, and we devolved into throwing socks at each other like expected.

today's video is a little reminiscent....
submitted for your eyeballs by Wes at 7:30 PM