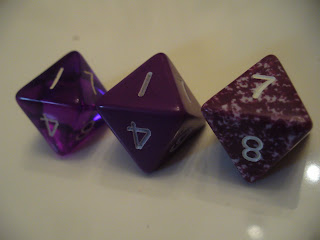 Hey, in Central Time, it's not past midnight yet. So my update is on time. Shut up.

Background: More gaming at the brother's house. I like to take pictures of dice sometime, and I figured that some pictures of d8's would be relevant to the Project I've got here. We played DND, fourth edition tonight and were having some fun with some of our older characters. We killed some dudes, got beat up but lived, and had a general good time talking about porta-potties. Apparently some graffiti writers had some pretty "inspirational" things to write on the inside of them.

That's about it for today. Watched my bro's kids for a few hours, changed a dirty diaper or two. Played some Teeworlds, and began a game of conquering solar systems (about halfway done now). And I also have a very interesting opportunity tomorrow, so stay tuned!

today's video plays off of tf2 players' masculinity...
submitted for your eyeballs by Wes at 12:05 AM