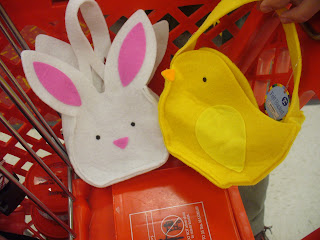 Hockey night again! And I'll probably see some of my high school friends there too. Sweet!

Picture: Aren't they just the cutest? A bunny and duckling bag...so CUTE

Background: So roommate and I went to Target for stuff. I needed stuff like new shoes, pants for a concert, tissues, things like that. He needed marshmallows for HvZ, which is a perfectly reasonable excuse to go to Target. We separated to get our own things, and when I saw him later...he had these. They're little bags to hold his marshmallows. His thought process, which I totally agree with, is that the zombiez will be completely humiliated (zombiliated?) by having a human stun them by use of these cutesy little bags. It's pure awesome.

today's video is a speech that i completely agree with...
submitted for your eyeballs by Wes at 7:08 PM