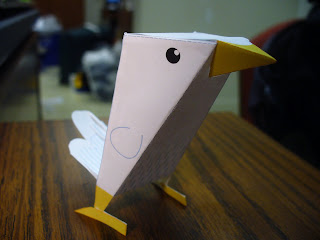 Background: My roommate made this last night (it was 1AM, so technically this counts as a picture I took today). He's planning on hiding them around campus and making some sort of game out of them. We're still working out the whole rules or whatever, but I'm helping out. Seems like it could be lots of fun! I think it's supposed to be a goose or duck or something, but I'm not entirely sure. Whatever it is, he says he's going to be making a bunch of them. Though, with only the 25-50 he's planning on getting done, I'm not sure if they'll be that noticeable. I'm thinking we need to go hide them during the early morning hours when there's nobody out (*note to self: propose this to him). There might be like a sort of reward or point system or something. Right now he's just getting them made. I think it'll be fun.

today's video is a pretty cool 3d animation...
submitted for your eyeballs by Wes at 12:25 PM