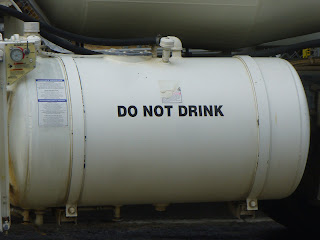 Early update for the crazies that actually give me pageviews at noon. Which would be nobody. But early update anyway because I caught a good picture with an hour between classes and I have my laptop with me.

Picture: DO NOT DRINK

Background: I passed a cement truck (not a mixer, according to second oldest brother) on my way to class. Near the bottom was a large-ish tank that said just that. I sort of chuckled to myself. I mean, you would think it would be pretty obvious that you should not drink things in large tanks that are attached to cement trucks. So I had to stop and take a picture (even with some odd looks, but I didn't really care. It was funny).

Today is also Say Happy Birthday to a Marine Day (aka, my brother's birthday). Gonna call him once I finish typing all this out. He's old. But I'll be old too, so it's okay.

today's video is a little subtle...
submitted for your eyeballs by Wes at 12:08 PM