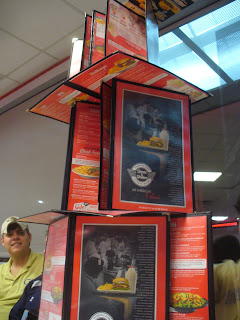 Picture: A tower of menus!

Background: Hockey band (that wasn't allowed instruments) went to the senior night game of the hockey game and made lots and lots of noise. The game started (not ended, started) at 10:00pm. So when it ended, we all went to Steak n Shake for some late night food and shakes. And when you put a bunch of menus and paper placemats in front of band kids at 1am, they're going to toy with them. So the menu tower was thus born! And half the time before we got our food we were throwing paper airplanes at each other. Even though we lost the game, it was still a ton of fun. It was an overtime loss, so it's not as bad as it could've been (5-4).

So I've got probably a few thousand things to do by Tuesday. I'm not exactly excited either...but they've got to get done! So it looks like an all-nighter on Monday. Yay.

today's video is one of my favorites...
submitted for your eyeballs by Wes at 11:15 PM