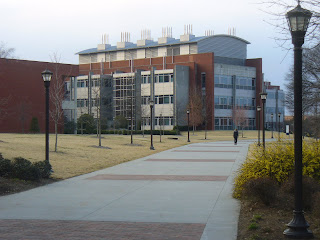 Picture: The MARC (according to the campus map)

Background: Oh, did I mention? I was the OZ! I got to eat innocent players who dared trust me. Muahaha! So I had the perfect liberty to take whatever pictures I wanted. So I stuck around the Student Center and took a couple pictures, including this one near one of the wide open walkways. I really like how this one turned out. I took some more of the flowers you can see right there, but I don't think they came out that well. I also took this picture two days ago, and I'm using it now because I have not had the time to take a picture all day. I got up, had breakfast with a couple zombiez, had some classes, more zombie time, more classes/a lab, lots more zombie time, and now. Carrying around the point and shoot camera really hinders your ability to run after humans.

The first mission of the day didn't turn out too well for me. Got stunned twice and the group didn't get any humans that I know of. Later I drew a little bit of blood (my own, promise) diving after a player (who happened to break the rules and will probably be zombified later) who got away. Then the night mission was horribly outnumbered on the zombie side, but we still got plenty of kills. Two from the rushes (marshmallows EVERYWHERE) and several more after everybody went home when the mission ended.

I also door dived a guy who should've thrown a sock when he was within that 5 foot range and didn't, and got two more by sneaking up on them. But the humans are smarter this time around, and they're organizing more...it's irksome. However, you all get two videos today because you read through that wall of text!

today's video is an awesome hockey shot...that was an attempt at a similar shot...
submitted for your eyeballs by Wes at 11:00 PM