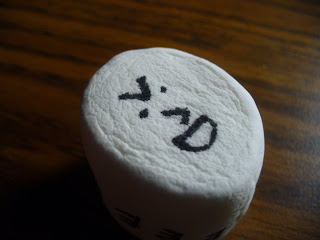 Four weeks? Holy crap. It doesn't feel like that long.

Background: It's a marshmallow! I'm obsessed with HvZ, okay? And I have a Sharpie...and a stale marshmallow...I did this a few days ago. I figure that now that I've got time, I'm gonna be writing on some of my marshmallows for fun, so when the zombiez get hit, they can see the word "STUNNED!" on the marshmallow or something like that. This is my experimental one, I guess you could say. Any suggestions as to other (appropriate) things to write on them?

Had only one class today, and nothing to do over the weekend for once. I might actually play my Xbox for the first time in ages. Since the snow day/week in early January, actually. Weird.

Last night as I was about to turn off my computer for the evening, I noticed something about my top played songs...see for yourself (click!). The song playing at the top is also pretty cool, and you should listen to it and the rest of the album. It's an artist called C418 (I posted their song "acid" 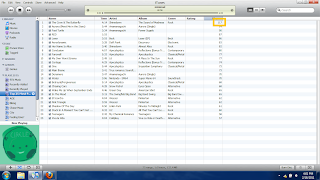 submitted for your eyeballs by Wes at 3:48 PM