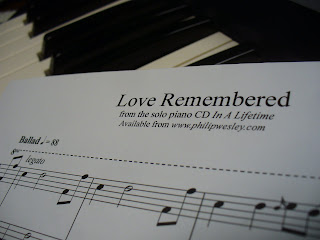 Blargh! Tons of stuff to do and I'm not doing it. Double blargh! But hey, two pictures for today.

Picture: Love Remembered by Philip Wesley, and a page from a different song in the same song book.

Background: My songbook finally came yesterday! Woohoo! I love Philip Wesley's work, and I've been wanting to play more of his music. I can already play the one I linked above (bought it before I got the book). I'm on his emailing list and he sent out word that he had a songbook for $20 and he'd sign it too. I snatched it as soon as I saw the email, figuring the songs were cheaper in the bundle than bought separately (including two Christmas songs). I found out as I was waiting for it to arrive that it went up $10...so I saved by getting it early! Philip even personally emailed me. It was awesome. Already starting to learn Light and Shadow and got through the first page or so. 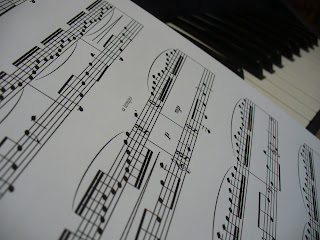 submitted for your eyeballs by Wes at 6:44 PM