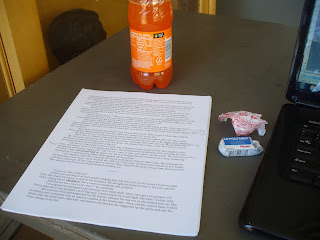 Happy Valentine's Day! Commonly known as Lovey-Dovey Day, Singles Awareness Day, Singles Hate The World Day, etc. Too bad it falls on a Monday; it must make tons of marriage proposals awkward if they decide to do it today instead of the weekend or something.

Background: See that paper? I hope so, because it's pretty obviously in the center of the photo. It's one page of 17 so far of another thing I'm doing. Writing a story! I don't want to tell people what it's about just yet, but it's been fun to write. As I type this post up, I'm in one of the school buildings, taking a break from working my edits into my laptop file that's it's in. They're also giving out free candy here and I got a dumdum lollipop (and bought an orange soda, since the dumdum made me thirty) that you can see the wrapper of.

Monday is also a fantastic day for webcomics, at least for me. All the ones I read update on Monday, so I guess it's like a consolidation for it being Monday. Amazing Super Powers, xkcd, Cyanide and Happiness, SMBC (and SMBC theater)...awesomesauce!

Totally forgot to mention earlier that my brother has an awesome RPG game that he's designing, and made a website for it. You should check it out! (I wrote the italicized intro) :) We already playtested once, and...well, you can read up about it if you're interested.

today's video is one of my favorites of cohen...
submitted for your eyeballs by Wes at 12:20 PM