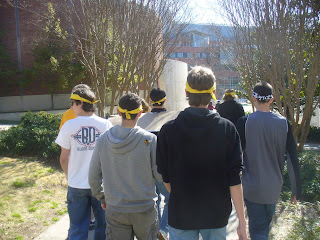 Background: Saturday morning mission and finale was today. Too much detail and too much fun to put into a post this late at night with this much tiredness. Just know that we had to steal that piece of cardboard and hide it. We did it successfully. I don't know how effective it was later, but whatever. We had lots of fun today, and I think that the finale turned out well even though we let 5 humans escape our wrath. If you want any part of the story of any part of this week, just talk to me since I like telling a story personally rather than telling one over the phone or through messages or things like that.

There's a building implosion tomorrow at 7am. I really don't know if I want to wake up for it just because I've had a long, tiring weekend, and I'm not guaranteed a good view anyway. So I'll probably just sleep through it. Fine by me.

today's video is of a couple old geezers...
submitted for your eyeballs by Wes at 12:15 AM