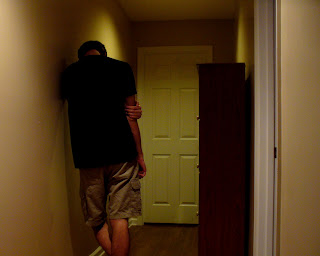 Picture: It's me again

Background: Last night I was getting a bit experimental with my photos for once. The originals look nothing like the edits - this being an edited version of one of the ninety or hundred pictures I took. I really don't know what inspired this, but as soon as I took one or two, I kept going. Most of them make me look like an angsty, depressed, emo teenager, but that was sort of what I was going for anyway (I'm none of those, by the way). Something different, for a change. And now that I finally realized how cropping/contrast/adjusting pictures can make them look so much better, I think I'll stick with maybe messing with pictures now and again. It was pretty fun (especially at 3am). The full gallery can be found here if you're interested.

I'm probably going to be home past midnight, so I was going to update now since I won't get back for awhile. About time I didn't have an 11pm update! It's been awhile.

today's video is about falling down...
submitted for your eyeballs by Wes at 3:59 PM

Email ThisBlogThis!Share to TwitterShare to FacebookShare to Pinterest
Includes: home, me