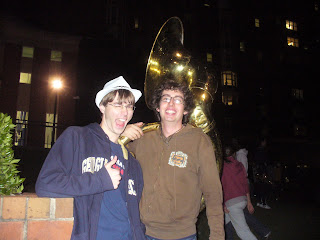 Picture: Me, a fedora, and a guy with a tuba.

Background: Okay, this might take some explaining. Firstly, there were a whole bunch of students who just happened to be at the nearby dinging hall that began singing a song about a certain school they dislike, as well as playing a few songs on their instruments. I just happened to catch wind of this event somehow and showed up to sing and dance along. It was great fun. The reason I got a fedora was because the bass drum player asked me to hold it for him (and I wore it instead). We went from the dining hall to the local quad to the quad in the nearby North Avenue apartments. After they played some songs there, I wanted to get a picture with the fedora. Well, this tuba player happened to suddenly want to pose with me as he passed by. So we posed. It was pretty awesome. And now, I must study for this 8am exam tomorrow that is going to shaft me, and hard....

today's video has relevant to the phrase, may the fourth be with you...
submitted for your eyeballs by Wes at 12:39 AM