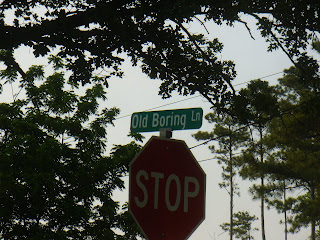 Background: If you drive around my hometown, on a road that links two of the more majors roads, you'll have a chance to catch sight of this side street. I saw it a few years back - before high school, even - and thought it was hilarious. I still think it's awesome that we've got an "Old Boring Lane". It definitely tops the backwoods street pun I saw a few years back that was named "4 Wheel" and it was a drive. Four Wheel Drive. Very lame. Old Boring Lane is better. You can quote me on that, though I'm not sure why you would.

I actually passed it and thought, "I should get a picture!". So I went to my destination, did what I wanted to do, and went back and snapped some pictures. Then went home, since I had to go home before dark. There's a headlight out on the PT and I don't want to get pulled over and have to feign ignorance about it. "But officer, my parents told me that I didn't know!" I mean, really.

today's video is crazy over the rainbow...
submitted for your eyeballs by Wes at 7:36 PM