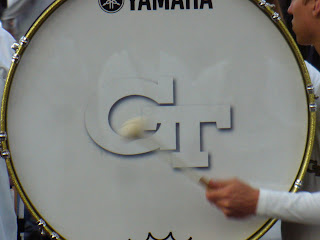 I'm not talking about yesterday.

Background: But it was still fun. I was pretty exhausted from yelling during the game yesterday and was glad to get back to my room. I tried getting a drum picture already, but you could see my reflection in it. This time, I was far away and zoomed in while he was playing. I honestly don't know the battery too well (though I know some of the cymbals pretty well).

Other that that, I'm updating on time because I won't have much of a chance to later today. Tonight is a gaming marathon for charity here on campus from 8pm until noon on Sunday. I'm going to be there as much as possible, but I do like my sleep. We'll see how that turns out. I might fall asleep playing Sins, who knows.

today's video is nsfw for language...
submitted for your eyeballs by Wes at 12:01 PM