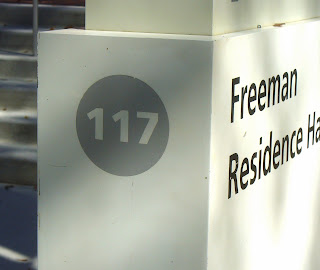 Background: I was walking to band super early today, and finally got around to taking this picture. The SUV that drove up behind me was probably wondering why in the world I was taking this picture, but I don't really mind. I snapped a couple shots and was on my way.

I signed up for Night of Musicianship for this semester. I've been wanting to, but I didn't have a practice room or anything last year like I do now. So, I'm using it so I can play for an audience! Should be plenty of fun.

Also, I began moving all my blog pictures from their individual folders to a new one. I might upload them all to Flickr at some point, except because of my lack of funds and Flickr's abundance of lame, you'll only be able to see the last 200 photos I upload. Maybe that will change at some point, but that point is a long way away.

today's video is gay, in both meanings of the term...
submitted for your eyeballs by Wes at 8:55 PM