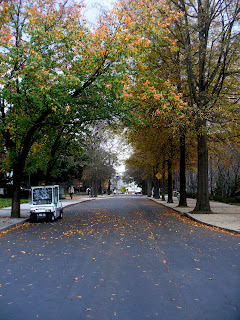 Picture: Cherry Street from the library

Background: There's not much to the picture itself. I was leaving the library after class-that-was-meant-for-group-project. It was a cool view, so I took a few pictures.

Else, I tried my hand at playing piano in front of people. I failed miserably, and wasn't quite happy on my way back home. But I got to see my parents, at least, so that was a plus. Life goes on.

Also, I hate being forced to wear a jacket in my own apartment. They're great guys, not bad random picks, but I don't want to live in a freezer. I know it was probably near 70F today, but it's not like that's hot! It's barely comfortable, if you ask me! Ridiculous.

today's video is very relevant to this week...

(I've probably already posted it, but it'll never stop being relevant)
submitted for your eyeballs by Wes at 10:29 PM