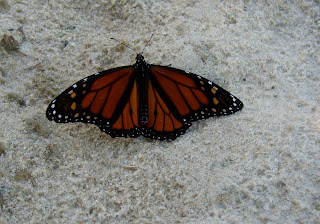 Background: This poor thing was in the volleyball sand all during Pit practice, and I was hoping it would stay there so I could snap a few pictures of it before we headed over to full band practice. I did get that chance, although I didn't get nearly as many as I wanted since we were a tad late moving over.

And now, I feel like a jerk because I didn't help it. I was being pushed into hurrying up and moving over (along with the other 3 that were taking pictures) so I didn't give it a second thought. Hopefully someone did something, as the poor creature looked like it was stuck in the sand or something. It wasn't moving very far from where it was :(

Ah, well. In other news, absolutely nothing of note happened to me today. Just like Good Friday, 1930.

today's video is an smbc comic, except moving...
submitted for your eyeballs by Wes at 10:28 PM