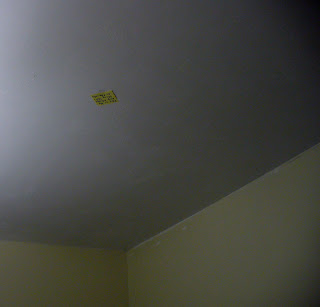 Hey, I only missed two days, okay? Not too bad.

So my room's ceiling got plastered again. The popcorn stuff isn't falling off anymore, although it did smell a little funny in here for a day or so after the workers left. It was looking at it and it seemed rather dull, so I stuck/taped a sticky note up there. It says "This is the only interesting thing that's on this ceiling". Fitting, don't you think? The whole thing is otherwise plain, boring white. Obviously I'm going to take it down when I leave this place, as long as I remember. Come to think of it, I feel like I stuck a sticky note somewhere else in this room that I completely forgot about. Hopefully, if I did, I'll find it before I move out. Hopefully... 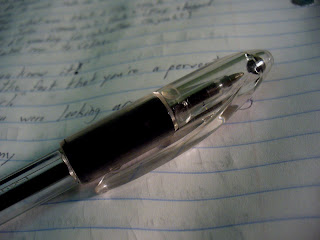 This is my new pen! Well, it's not really "new", but it's my new writing pen. The one I had been using ran out of ink after over a year's worth of service. I saluted it, said goodbye, and fished this one out. I went ahead and snapped a picture of it on one of the pages of my writing notebook. If you could kindly not read the background, then that's great.

I'm kind of a stickler of how pens write for me. I like them runny, but not to where they run through the page. Like, if you set it down, there might be a smudge where you left it, but it would be faint on the other side of the paper. 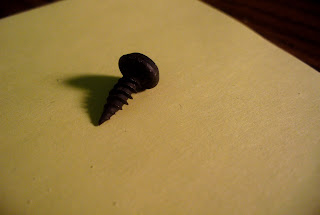 I've been meaning to take this picture for a long time. I found this screw somewhere and kept it, wanting to take a picture of it later. I think it's been at least four or five days that I've had it and waited. I thought the rustiness of the screw would be kind of cool. My camera really didn't want to focus on it through most of the pictures, which was a bit frustrating. It makes me really want to get a new camera, for the umpteenth time.

Also, Firefox apparently has "umpteenth" in their dictionary. Coolio.

today's video is about nutters...
submitted for your eyeballs by Wes at 8:43 PM