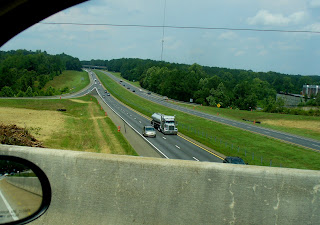 Background: I swear the light was red when I took this picture, okay? I'm a good driver. Anyway, I've been editing pictures for a good two or three hours now, and this is one of them. The unedited one looks loads worse, and I don't know why I don't edit more pictures. I mean, some of these are turning out great for what I'm doing! If things go well, what I'm doing will reveal itself in the early morning hours. If not, then it'll be sometime tomorrow afternoon.

As for today, I moved about 4,000 pounds worth of rocks. 67 of them that weigh about 30 pounds each. I would move some into the four wheeler we have, drive around, and unload them. So I'd pick them up twice (all while trying to avoid some poison oak/ivy). So multiply those all out (67*30*2) and you get over 4,000 pounds of rock moved. The after shower was really nice, believe me.

today's video is about having lots of fun...
submitted for your eyeballs by Wes at 10:55 PM