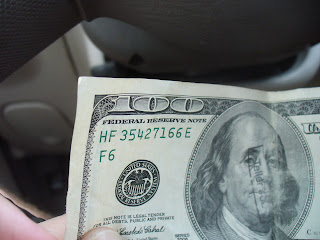 I did lots more today than I did yesterday.

Background: But it's not my $100. I had to run by the farmacy to grab some meds for stuff, and Mom told me where to find a $100 to pay for it. So I was playing around with it in the car while I was waiting for the prescriptions, etc. After that, I went to Ms. Schooling's house and played with him on his new Kinect. It was fun but weird. Then I showed him a song or two, and he showed me a song or two. Then I went to play three card poker, and ended up dealing instead. At least I got a free appetizer or entree or something for dealing. Good day. And tomorrow, I have a full photography thing planned out until I have to work. Hopefully I'll actually get up and go do it. Hopefully.

As for now, I now have "is photography of money illegal" in my google search history. Bam!

today's video is about the president...
submitted for your eyeballs by Wes at 10:28 PM