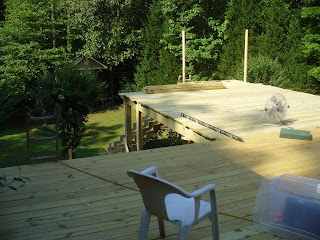 Did almost nothing today! Hurrah!

Picture: More of the deck WIP

Background: The stairs are in now (for the most part). I had a great idea to run a small HvZ game in my front and backyards, as well. But since there's no railing on the deck, and it's nowhere neared finished, I'm putting it off until later. I do have a few ideas for how to run the game, but that'll be later in life.

The 'rents and I ate dinner on the deck - steaks! The breeze blowing by was pretty nice. Other than that I didn't do much today. No work, everybody's elsewhere, so I just hung around the house all day. Horray.

today's video is about forgetting backpacks...
submitted for your eyeballs by Wes at 9:34 PM