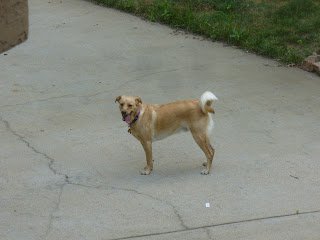 Picture: That dog again! (from two days ago)

Background: Mostly because nothing of major note happened today. Apparently there was a debate on TV, but I missed it because of work. And I probably would have missed it anyway because debates and politics don't have any interest to me. I probably should care about politics and the presidential race and those things, but my personal opinion is that once they're in office, they're going to get bought by groups to where it's those groups controlling it all. But it's nice that they at least put on the air of free elections for us.

...please don't start a political debate in comments, all three of you who read this :(

today's video is about stick figures on drugs...
submitted for your eyeballs by Wes at 11:13 PM