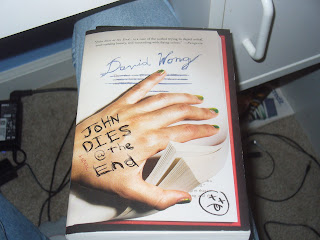 Background: This book is creepy as hell. It's not knock down drag out scary, but it's not a walk in the park either. I was at the Mall of Georgia last week with the family, and I saw this at the Barnes and Noble there while my mother and aunt were talking over ice cream or something. It caught my eye, to say the least. When I turned it around to read the back, I was instructed that I should not have touched it with my bare hands, but it was too late. They're watching. But seriously, if you want to be just creeped out, grab this book. I still haven't finished it, but my guess is that John dies at the end. Some weird stuff happens in it, not least of all eyes blowing up and the ability to count all subatomic particles in the universe. Weeeeeiiiiird stuff. Don't read this before going to sleep.

today's video may or may not be gay...
submitted for your eyeballs by Wes at 5:22 PM