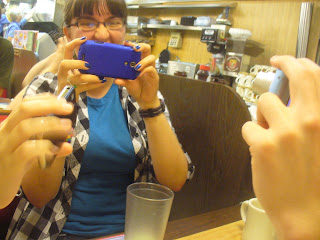 Background: So if you remember that Nyan CD from a day or three ago, then great! If not, well then I'll let you know that two people wanted some CDs with an hour's worth of nyancat on it. These people also happen to have a bunch of fun while making food, and I don't think they would mind if I gave them a little mention here. (It's actually three people who do their blog, but only two of them wanted the CDs). We went to WaHo near midnight to exchange CDs, and they brought five more people than I was expecting. So that, my friend reading this, is the reason why today's is late. The phones and camera pictured belong to the CSA chefs.

The rest of the pictures from tonight/this early morning are gonna go onto facebook at some point, but not right now. And not on the 117 facebook page, because no.

(as an aside, I've used the "nyancat" tag on my posts a LOT lately)
submitted for your eyeballs by Wes at 2:21 AM