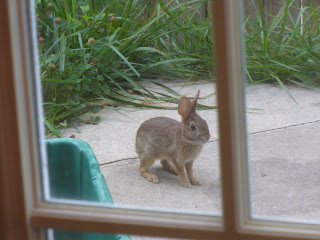 Picture: it's a wabbit!

Background: At DND, this little fellow was spotted by one of the people in our group. Apparently he eats the stuff in my brother's garden. So I took out my camera and tried to get a few good shots of him. This was the only one that turned out even halfway decent, though. Other than that it's been an okay day overall. I have to get up in about seven hours, though, to take care of three little ones, so I can't say anything about tomorrow.

today's video is about a lonely park bench...
submitted for your eyeballs by Wes at 1:15 AM