First non-365 post I've made! In order to make it official, I had to wait until it was a late post like so many before it so it fits in with the rest. That was my reasoning this entire time. Definitely.

Last weekend I got the chance to see the show Blast. It was exciting, entertaining, and had it's funny moments. Obviously I was going to be a little harder on it because I'm big into music, but it satisfied my expectations (and more!). There was a snare battle, some fantastic color guard work, and plenty of fun horn features. It's a show to take people of any age to, as well. My nieces had a birthday party the night before, and this was my parents' gift to them. Technically it was also mine too, since I can't afford anything more than a hug and smile. 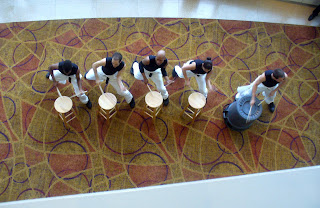 During intermission, some of the percussionists came out to the lobby for entertainment. They were very comfortable with the crowd and were narrating between playing. They drew a few good laughs from everyone watching, and looked like they were having a lot of fun out there.

Speaking of some music, there's been a new artist in town, with "town" being "my music library". I'll start by saying that I've got an instrumental/post-rock playlist on Pandora. They feed me some good music that isn't marred by lyrics (usually). Some are more ambient, some are kind of more groovy, but now and then Pandora gives me a band that just plain rocks. This latest band is called Russian Circles. I don't know how much any of you would like them (because I don't know my audience all that well) but they're worth trying out a couple songs. They have a larger selection of faster songs (see this and this), but have their good, slower songs as well (this and this). If you like 'em, then awesome! If not, well I'm not forcing you to listen. Not yet.

Since this turned out a lot wordier than I expected, I'm going to leave my other post-365 blog ideas for later. I did get something else to read that I haven't forgotten about, and I've got three or four other ideas that I can work with. If anything exciting happens over the week, like that Blast concert, then I'll probably share it. I have no idea what to do with post names, either, now that I think about it.

Finally, I just want to let you know I'm actually juggling two blog posts per week now. This one, obviously, and one for English class. The other one is a lot less entertaining, but I guarantee that it's much more insightful because it has to be. So just know that I'm going to line that up with my excuses as to why this hasn't been updated. Ha!

My favorite comic of this week has to belong to ASP's Wednesday update (includes alt-text and hidden comic).
submitted for your eyeballs by Wes at 12:03 AM