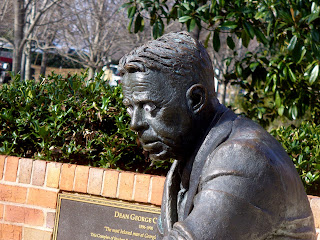 First, I want you to say hi to Dean Griffin here. He doesn't normally look like this, but it was funny. Standing far back enough, you could only tell that something was just a bit strange. I decided, when i was far back enough, to eat lunch next to him yesterday. Then I got closer and closer and figured out my Wednesday picture.

People often dress him up, put little decorations on him, or do all sorts of fun things to the statue (nothing meaner than googly eyes). During HvZ, he's usually seen with a bandanna - early in the week he's a human, later he's a zombie. 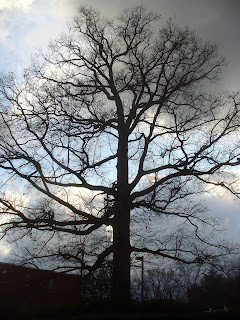 In other news, I saw this tree on my way back from work on Thursday. It's pretty glorious and leave-less. The wind was blowing the clouds rapidly, so the three pictures I got have different cloudy backgrounds. There was one other tree picture that I almost couldn't decide between. I did like the dark cloud behind the top of the tree here instead of whatever that other picture had.

That's mostly it for the past two days. Just getting back into the groove of school and getting into the groove of a new job. Then there's nights watching Once Upon A Time and Firefly with girlfriend. Things are going smoothly (and I'm actually doing my assigned readings on time for once).

I'll go ahead and leave you with a really rockin' song. The ending is pretty kickass.

(Friday's actual post will be later today, when I'm miles away in Savannah)

submitted for your eyeballs by Wes at 9:37 AM