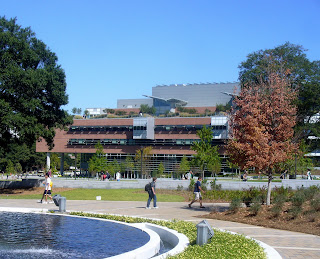 Okay, this was taken on Friday. So sue me, I'm using it for Saturday's picture. I spent most of Saturday not doing much. I did laundry, does that count?

Either way, I got to check out a friend's camera on Friday right after taking this and Friday's picture. It was exciting and jealousy-inducing. I'll have money for a nicer camera someday, but not today. 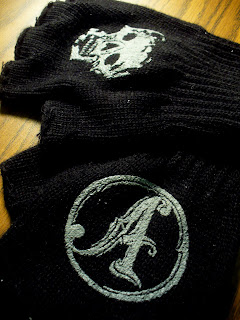 Background: Probably shouldn't have splurged on these about a month ago, but they're from Apocalyptica. They were my favorite band until I found EITS (and saw EITS LIVE ON THURSDAY RAAAAA). I've always wanted a pair of fingerless gloves, and since winter is coming around the corner, I think they're a justified purchase. They'll keep my hands warmer than having nothing like usual.

Else, I didn't do much today either. I overslept the Photography Club outing that I wanted to go to. I grabbed some groceries (and lost some more cash). My soda addiction is kicking back up. Unrelated to that, it's pretty rough carrying four bags and two 12 packs all the way from the trolley stop to my apartment.

Since this whole Project 365 deal is already 2/3 of the way through, I've been kind of thinking about what to do with the blog after the fact. I've toyed with a few ideas already, including posting bits of the stories I'm writing, to making it a weekly picture collage, or something along those lines. I'll probably keep blurbing about nothing and try to be funny as usual, though, so I probably won't go away.
submitted for your eyeballs by Wes at 11:51 PM