I have an excuse, I promise. Well maybe not for the past two days, but I do have an excuse. For the record, I need six pictures counting today. I did take pictures on most of these days (well, not Friday or Monday) so it's only partially cheating. Ahem.

(for the pictures, just skip this wall of text and head to the bottom)

So Friday things were going alright for the most part. No pictures that day, but I do remember being exhausted from staying up late and getting up early. Saturday was GAMEDAY (W21-16 over maryland). I was also exhausted, but for a different reason that I found out after the game. So we unloaded/reloaded our Pit junk so the battery/tubas could load their junk. I stumbled back to my apartment, fell on my bed, and napped.

Except, I didn't get out of bed until Sunday around 5pm, making it about 25 hours of sleep. So clearly I wasn't feeling well. I did remember getting up once for water (after telling many dream-people to get it for me with no success). When my phone's alarm went off Sunday morning, I was thinking that it was somebody texting me 13 times in a row, on three separate occasions. Fun times.

That's pretty much been my life for the past 4-5 days. I'm pretty much okay right now save for the hacking dry cough. So without much else to talk about, here are some pictures! 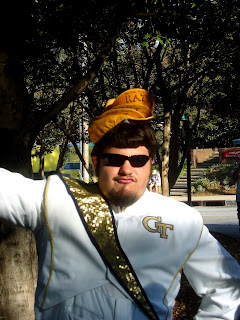 First four are from GAMEDAY. Buzz took all the RAT caps and gave them to the cool big guy here. 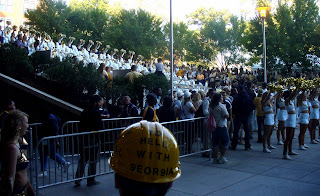 A Maryland player got seriously hurt at the game. Here's for the speediest recovery one can hope for.

Speaking of recovery, this is what I was trying to use to recover. It worked, I think. But it was nasty. 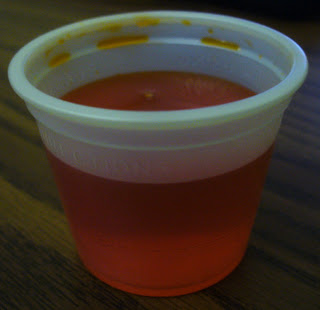 And finally, I was featured in a CROSSOVER!!! Hurrah! We made food together and took pictures (a combination of both of our specialties! how quaint). They're awesome people, made with awesomesauce. No joke. 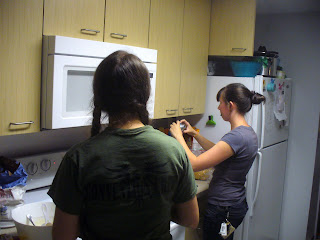 But, uh, this picture wasn't on that day. That day was not yesterday. This picture was yesterday. I got invited over for DnD planning (woo!) and breakfast for dinner. It was delicious. They had bacon, so everything was right with the world.

today's video is a pretty cool photoshop tool demo...
submitted for your eyeballs by Wes at 2:09 PM