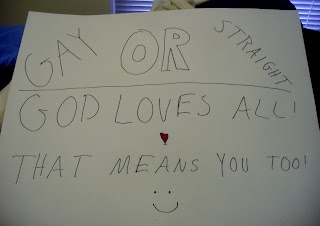 Sometimes, you gotta take a stand.

Background: And today, I stood against fundamentalist Christians who told several people that they were going to Hell for their sins. It was like Oprah: "You go to Hell! And you go to Hell! Everybody goes to Hell!" Well I wasn't happy with what they were saying, so I made this sign. It's kinda rushed, but all I had was a sharpie and the cheap poster board I had bought at Burdell's. I made the sign and stood behind the hate-filled people. I'm pretty sure I was called a sodomite at one point (I heard a guy with a megaphone tell someone that there was "a sodomite behind you", but I wasn't sure if he was talking to me. He seemed like he was facing my direction). All I did was stand behind the haters and hold the sign. A good friend got his own poster and joined me.

Plenty of people got my picture, which made me smile. I doubt I'll ever see the pictures, but I know they'll be out there somewhere. I also got plenty of words of agreement and "Good job" and things like that. Hey, I'm just doing what needs to be done. Those guys were making us Christians look bad.

And lastly, props go out to the Catholic priest who was ripping their logic apart with the faith. It was amazing to listen to, and I only heard him speak for around 2 minutes. The guy was grasping at straws the whole time.

Anyway, I'm finally home for Fall Break! Got my power cord this time, as opposed to last time where I had 10 minutes of battery left and wasn't daring to turn on my laptop all weekend. It'll be a nice, relaxing few days away from Tech for once...
submitted for your eyeballs by Wes at 9:31 PM