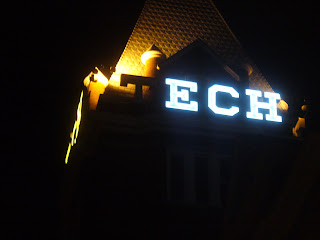 Background: As a part of a campaign to stop defacing campus, the lights of the T on Tech Tower were turned off at around 8:45pm. So, naturally, I took a picture. I have no tripod, so a decent night shot was out of the question. Plus, I was being pushed back into my room by four other people so that I could give TWEWY to someone. He traded me Puzzle Quest as a sort of game deal. So now I have a DS game to play (along with the five other games I have yet to touch)!

PS - There's a fun little logo in the top of your tab now! It says 117, of course. What else would you expect?
submitted for your eyeballs by Wes at 9:52 PM